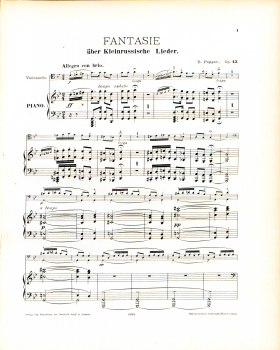 In the last decade, David Popper's Fantasie über kleinrussische Lieder, Op. 43 has become a staple of the cello repertoire, in no small part due to Janos Starker's celebrated recording. Kleinrussland, or Little Russia, has been misinterpreted as Russia proper by several authors, including Stephen De'ak, describing this Fantasie as portraying the Russian steppes in his book about Popper (p. 269). However, Little Russia was the pre-October-Revolution name for the northern portion of modern-day Ukraine.

Popper's Fantasie is in three parts. The first part is an invitation to a dance, а kolomyika. A short cadenza connects the first part to the second. The second part is a theme, six variations, followed by the theme. This theme is in the style of a Romanian hora (Jewish in origin), also called a zhok. It is in a slow 3/8 time, typically played by wedding bands at the time. According to his own accounts, the third variation is a memory of a sleigh ride to the castle of a music-loving prince who, following the ride, gave Popper the gift of the fur coat that kept him warm. As with many zhoks, this one is followed by a fast 2/4 dance, in this case, a kolomyika.

This work is one of the more technically demanding compositions by Popper. It includes extensive use of harmonics (natural and artificial), tremolos, double-stopped trills, arpeggios, and rubatos.

De'ak's book states that "The Russian Phantasy (Op. 43), for cello and orchestra, was published in 1881." (p. 269) However, there is no evidence that it was ever orchestrated, and according to the Hofmeister Monatsbericht, it was published in April 1882.